The hype train for Battle Arena Melbourne next month is picking up a ton of steam with each passing week, and we’ve got a couple more announcements here which are sure to help fuel that engine!

Not only has the list of fighting games represented in the tournament schedule grown significantly since the initial announcement, but CouchWarriors have now confirmed the return of the “BAM Bounties” competition – offering special prizes to anyone who can take down the top-ranked players of CouchWarriors League in their favorite game. 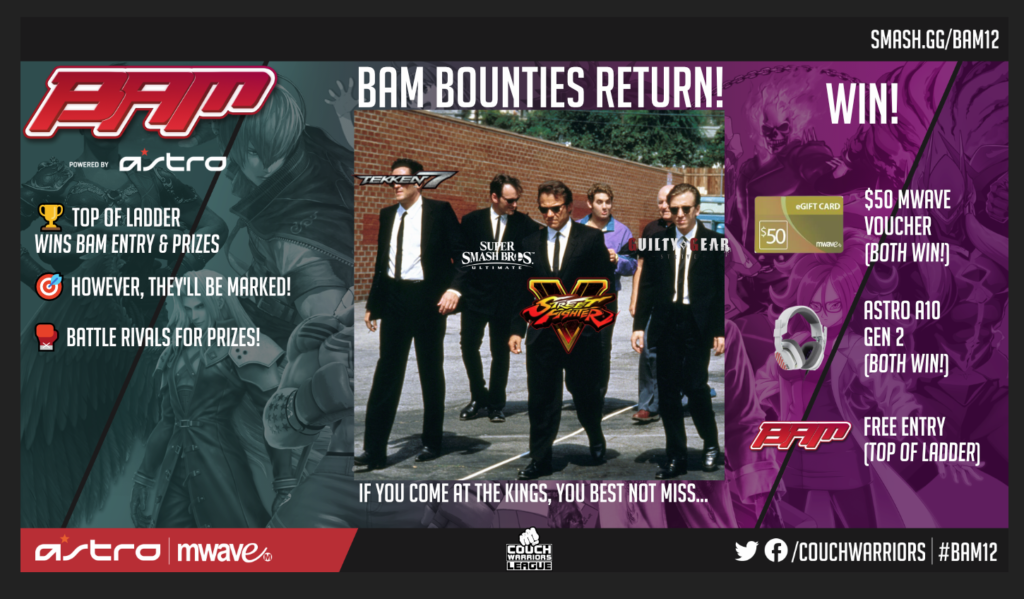 BAM Bounties are back

This year’s date for Battle Arena Melbourne falls a little too early in the year for it to decisively crown our CouchWarriors League seasonal champions. And the threat of international competition can sometimes drown out hopes of a best-of-CWL showdown. But it’s still a huge test for any championship hopefuls in Street Fighter V, Tekken 7, Guilty Gear: Strive and Smash Ultimate, and BAM Bounties is set to turn up that pressure cooker a little higher.

For each of the four CouchWarriors League featured games, the current #1 ranked player for 2022 will receive a free Competitor’s Pass to BAM12 and registration for their chosen game. We want nothing to keep our best players out of the fight!

But in return, those players will also be saddled with BAM Bounties for the duration of those brackets. Beat a marked player at their own game and you could win prizes from our primary sponsors, Astro Gaming and Mwave. Happy hunting out there!

That’s right, the header image at the top of this article is just a taste of the many, many, MANY side events we’ll be firing off throughout the BAM weekend (and afterparty!)

This list may not yet be complete – the application form for new community-run tournaments is still available – but here’s a more digestable rundown if you find that many logos in one place overwhelming:

Battle Arena Melbourne is Oceania’s largest fighting game tournament and an international major on many pro circuits. BAM12 will be held at the Melbourne Exhibition Centre between May 13th and May 15th.

You can get your ticket online now – those planning to enter the tournaments should buy the Competitor Pass ($60AUD) while the Spectator Pass ($25AUD) is enough to cover everyone else. Full details on BAM12 and how to enter different events can be found on the BAM site or our main BAM news post.