The Stories of CouchWarriors Crossup 2019

The Stories of CouchWarriors Crossup 2019

Merry Christmas and happy holidays to everyone across the AUNZ FGC! 2019 has been a year of big tournament turnouts and big tournament performances, capped off by the year-ending mini major CouchWarriors Crossup. Full results from the event have already been reported here, but there’s so much more that goes on at any event like this than those results can really tell.

To make sure we can celebrate everything great about our community and the events we put together, this will be the first of a string of tournament recaps focusing on the best moments, images and personal achievements from those events. If you have any great moments to share or captured some good energy on camera, go ahead and send it to [email protected] so we can add them to the list!

The BAM Path to EVO has continued to raise the stakes and bring a little continuity to tournaments in its 2nd season. Having shared leaderboards for MK11, SFV, Tekken 7 and Smash Ultimate across multiple regions has also helped spice up the interstate competition, which finally came to a head at this final event of the season. CouchWarriors sponsored travel for the Season 2 winners from interstate, who then had to run the gauntlet of local Victorian killers to make good on their titles.

While there’s no doubting the calibre of the season’s points winners, what we saw at CWC was a testament to how hard it is for even top players to capitalize in large tournament brackets.

In SFV, for instance, Yuvin “GG|Rumours” Manadeniya accepted the BPTE sponsorship after points winner Reagan “S-NET|GhostChips” Kelly couldn’t make it. Rumours looked every bit as good as advertised against most of the locals, but was humbled by the red-hot Christian “ORDER|ROF” Dedalija 3-0, and then narrowly eliminated by Xavier “DS|Somniac” Nardella in Losers Finals. Despite a season that included dominance over the YSB ranbats and a huge win at OzHadou Nationals, Rumours will now have to run it back in the next season to get another championship shot at BAM12!

The Smash Ultimate points winner Ben “411|Ben Gold” Gold also ran afoul of the strong CWC field. Despite having proven his tournament chops by winning this year’s huge BAM11 tournament, Ben Gold could only make Top 32 here, thanks to a shock loss in pools. Local Little Mac phenomenon Daniel “OnePhoAll” Tran triumphed in a battle of the low-tier specialists, significantly lowering his MKLeo number in the process. From there the Queenslander battled on in Losers side, but was eventually stopped by fellow interstater Tomas “DT|Luma” Parrish. In the end only Tasman “DS|Waz” Stoker was able to uphold his #1 standing with a tournament win, crushing the MK11 bracket as he was expected to do. While Waz seems to be able to win at will in NRS games, the other BPTE titles were quite tightly contested and it would come as no surprise to have all new points champions when they reconvene for BAM12 next year.

The visiting forces from interstate were not limited to just Path to EVO winners, and plenty of other names did their share of damage in bracket. Luma’s win over Ben Gold enabled the Tasmanian to eventually climb into 5th place, while Joseph “Doctor A. Ness” Cresnik made 4th after an extremely tight loss to Nick “DS|Extra” McKenzie.

JJ “LuckyBox” Fagavao claimed 5th in Tekken for NSW in a Top 8 dominated by the local scene. Sydney was also well represented in the smaller games thanks to Jacob “Ryzuul” Biziuk scooping multiple top finishes and winning Project M and Rivals of Aether outright! Meanwhile, JediLink scored a win for Queensland over in BBTAG.

The back-and-forth between JediLink and ArtyBlazy across 3 sets culminated in this iron-willed comeback round.

Of course, this is only scraping the surface of what the interstate cohort managed. A huge part of any Major is the chance for new matchups and old grudges to be played out between the various regional scenes, and that’s only possible because dedicated players make a point to come out to CWC and similar events. The TOs and the whole of CouchWarriors VIC salutes you for your efforts, and we hope to see even more visitors next year!

Gonna do a proper write up about my time in vic later when I get home but I feel like I just need to thank you all for being so welcoming and awesome. Every event was a pleasure to be apart of and I loved every second of it!

Local Tekken player Hangman Kid announced himself as a new threat on the scene, busting out some incredible rounds en route to his first Major top 4.

The most exciting stories from any tournament are usually the upsets. We love to see a dark horse run through established top players, long-time grinders make a breakthrough win or newcomers to a scene earn their infamy. This year CWC featured several such standout performances worth specially shouting out.

The anime scene already knew about Gutu “Feri” Hassan’s credentials. After all, he took out the Guilty Gear bracket at this very event! But there were still some doubts as to his game knowledge or level of play when he signed up for BlazBlue:CentralFiction. Despite presumed unfamiliarity with the game, Feri displayed a tight and stylish Jin, cruising into the Top 3 with ease!

Traveling all the way from Perth, Brodie “Yume|Roach” Carpenter was a worthy standard bearer for the WA scene. Matched up against eventual champion Naveed “Kanga|Chand NY” Iqbal in his Tekken pool, Roach fought hard enough to take a game off him; one of only two players to manage that feat all day! Roach eventually fell to Darren “DS|MM|dreadtech” Taing just outside Top 16 in another 1-2 loss, but he still earned a lot of respect for the run.

Tekken 7 also featured a massive breakthrough finish for up-and-comer Paul “FAM|Hangman Kid” H., who stormed his way to 4th place with King. This personal best run included a victory over friend and rival “Hundo” as well as dreadtech, Kun-Mo “FAM|Gun_Mo” Yon, and a runback win over LuckyBox after losing to him Winners side! By the end, his decision to tag up as “Hangman Man” for CWC seemed completely justified.

Couchwarriors Crossup 2 marks the best I’ve ever done in a high profile VIC tournament. I’ve started Tekken roughly 2 years ago and have made wonderful friends and memories. There are many names to thank along the way but special mentions are as follows:

WE STILL ROCK THE DRAGON

DragonBall FighterZ was probably the big new fighting game of 2018, but for whatever reasons we’ve seen some of that initial popularity wane over the last year. Not everybody is ready to move on though, with a tight-knit community of players pushing DBFZ forwards in online dojo sessions and locals across Australia. CWC gave that community their biggest stage in a while, and they put on a show to match! The bracket was dominated by renowned nice guy and GT Goku fiend, Ray “KHFC|Agent17805” Usanto, who charged into Grand Finals without dropping a single game. But below him was a brutal struggle for the other finals spot, with William “19Z|Shadow19Z” Ure, “KHFC|Nolbie” and Lillian “Guumi” Mckenzie all trading wins with each other.

Guumi had been locked in the hyperbolic time chamber the day before running set after set against Agent, and it seemed to have paid off as she blew past interstate visitor “KHFC|Novix” and Shadow19Z to make Winners Finals. But all that training didn’t help Guumi against Agent himself, leaving her in a tough elimination matchup against ranbat bully John “ZEDDD” Le.

Training partners blackbox and ZEDDD have a showdown deep in Losers Bracket.

There were also some surprising match results courtesy of the previously-unknown “blackbox”. In a game with such a tight-knit community it is nearly unheard of for someone to come from nowhere to Top 4 a major, but blackbox turned out to be a friend and training partner of ZEDDD’s and more than a match for most of the field. 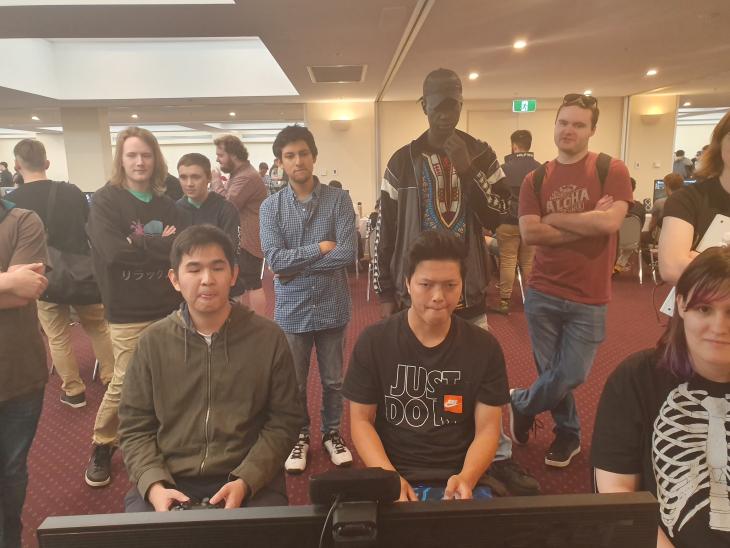 Ultimately Grand Finals was a fated showdown between ZEDDD and Agent. The two split their games evenly, 5-5, but the Winners side advantage gave Agent just enough breathing room to stabilise after the reset and snatch the victory! The two rivals hugged it out afterwards to cap off a great day for the DBFZ community. Courtesy of our incredible community photographers, there are plenty more images available from the tournament! You can find yourself and your friends on the CouchWarriors FB gallery – more images are being added over time, so be sure to check back later. A BIGGER BAM THAN EVER

Of course, there was one more big moment for the day after all our tournaments were complete. As the sun set on CWC, CouchWarriors looked ahead to our next Major, next year’s BAM12! The official announcement of the date and location (the MCC once again) was accompanied by the news that BAM12 would be featured as a Premier Event on the Capcom Pro Tour.

This was only the first of many big announcements for BAM12, with a clear goal of making this the biggest and best showcase for the strength of the AUNZ FGC. The upcoming season of BAM Path To EVO will culminate at the event as well, so the first steps of that journey will soon be taking place at ranbats around Australia.