Godzilla Is Coming To Magic: The Gathering

Godzilla Is Coming To Magic: The Gathering

Godzilla has done what feels like everything since first hitting screens in 1954. We’ve seen Godzilla battle King Kong in a true East meets West monster showdown. We’ve seen Godzilla take on Charles Barkley in a basketbrawl for the ages. Now the King of the Monsters is taking on the Planeswalkers of Magic: The Gathering in its latest set, Ikoria: Land of Behemoths.

Best of all, Godzilla won’t be coming to Ikoria alone. Several of Godzilla’s legendary kaiju rivals will also be joining the action as one of the special features of the Ikoria set: Godzilla Series Monster Cards. These cards will act as cosmetic versions of normal Ikoria cards that will be printed in the set. For instance, ‘Godzilla: Primeval Champion’ is functionally identical to ‘Titanoth Rex’.

Sealed booster boxes will contain one random Godzilla Series Monster card, whilst Collector Booster Boxes will contain two random cards. If digital card games are more your thing, the Godzilla Series Monster cards will be available as card style sets for MtG Arena, and will unlock as a special bonus when purchasing bundles of six or more Ikoria booster packs.

Ikoria releases on 16 April 2020 on MtG Arena and 15 May 2020 for the paper card game in Australia, North America, Latin America and Europe. 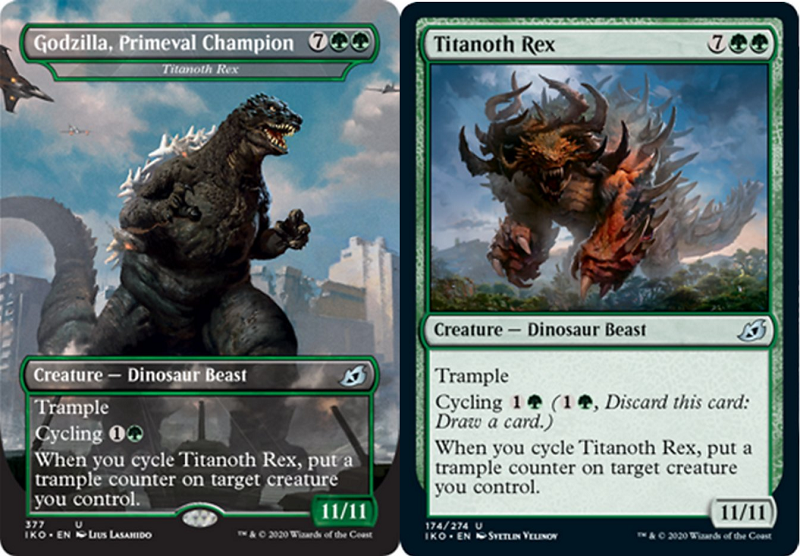 19 of these cards will be made available, 16 available in English and 3 exclusively in Japanese:

The post Godzilla Is Coming To Magic: The Gathering first appeared on New Game Plus Blog.