Before we start, real talk: Ubisoft has copped a bit of a flogging to the reputation lately, despite releasing some decent games in the past few years amongst the turmoil. So it was up to the company coming into E3 to leave all that behind and come out swinging, and boy did they give it a red hot go, starting off by bringing out Nintendo’s Shigeru Miyamoto and Bill Trinen to announce Mario + Rabbids: Kingdom Battle.

The unlikely crossover titles teams Mario with the Rabbids characters as you battle to restore the Mushroom Kingdom after universal upheaval sees Peach, Luigi and co put in danger by out of control Rabbids. Three years in development, the game is actually a tactical strategy game similar to XCOM, complete with cover tactics, line of sight and special abilities. In a rare move, Mario and co will use various firearms and weapons to battle all sorts of Rabbid baddies, including many themed around the usual Mushroom Kingdom enemies like Petey Piranha and Chain Chomps. While the gameplay looks great, the struggle will be keeping the humour lively; but the pre-release footage gives the feeling that Ubi has nailed the balance. We’ll find out on August 29th when the game releases. 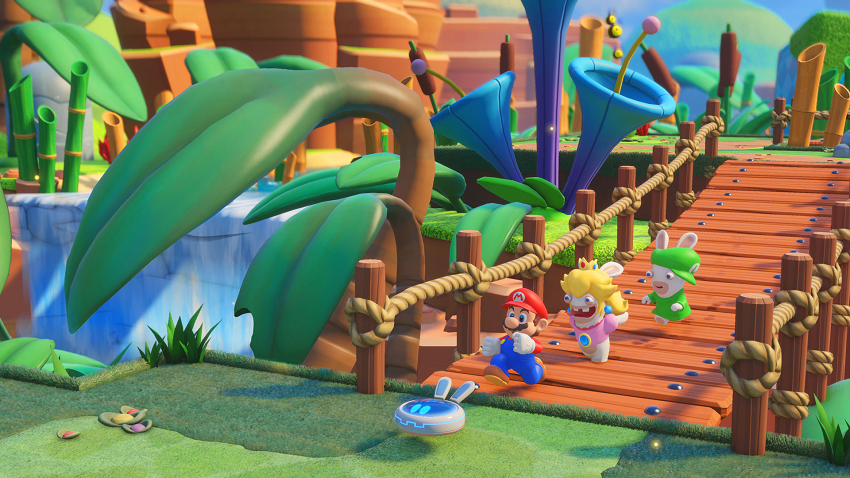 Being an Ubisoft event, there has to be Assassin’s Creed news, and this year we head to Egypt for Assassin’s Creed: Origins. While it doesn’t look like too much of the formula has changed, we did see expanded use of the toolset, including the use of your pet eagle to scout encampments and weapon drops with customisation. We also see expanded use of horses in this iteration, with some sly archery and acrobatics, alongside boats and other methods of conveyance. The setting is exactly as stunning as one would expect: the Pyramids rise high above the deserts, with the sweeping north African landscape shown in all its glory. The year off seems to have rejuvenated the series, and while it doesn’t seem to stray too far from the established formula, it’s looking like a solid addition to the series. We’ll find out either way on October 27th.

Because every publisher has to have a racing series, Ubisoft’s The Crew 2 made an appearance. Its main point of difference however has nothing to do with cars: planes, boats and motorbikes all make an appearance in The Crew, offering more than just car races for players. How these different races come together is yet to be seen, but we’ll find out in early 2018.

South Park also showed off more from The Fractured But Whole, continuing its theme of superhero movie pisstake that the team are serving up. All we got this time was another humour filled trailer showing familiar gameplay elements, but it came with a welcome reminder that the game is coming on October 17th. The bigger surprise from the South Park team was the unveiling of their new mobile game, South Park: Phone Destroyer. While very little was shown, it seems to be a card based game bringing together the multitude of different tropes the show has used in the past. Like the console game, we can expect Phone Destroyer later in 2017.

Ubisoft’s smartest play was bringing out the new IP, and they brought out a wide range of titles to the fore. The most unique is probably Transference, a VR title with an fascinating premise based on the player experiencing a stored memory. Introduced by Elijah Wood, the mysterious nature of the game left us with a lot of questions, but an eagerness to find out if the game can live up to the great trailer. Another one due in early 2018.

The next game, Skull and Bones, proved that Ubisoft doesn’t understand irony considering its position on video game piracy. Picking up a lot of Black Flag’s great pedigree, the game is set in the era of privateers, with large scale naval battles and strategy on the high seas. Different ships bring different advantages, with frigates offering attack power over the close range devastation of brigantines and more. The game also features PvP multiplayer, with Ubisoft demonstrating a 5v5 loot grab mode pitching fleets against each other to secure as much booty as they can.

The strangest announcement of the conference was definitely Starlink: Battle For Atlas. A ‘toys to life’ space game, you can construct physical ships to be uploaded to the game with varying parts, bringing to mind games like Skylanders: Swap Force with a dose of No Man’s Sky. The most pressing question has to be around the current popularity of a genre of games that were losing steam years ago, and especially one without the collectability of a Skylanders or Amiibo, but time will tell in 2018.

Far Cry 5 was also showcased, invoking scenes of Christian culthood in the US Bible Belt, a far cry (soz) from the usual exotic locations the series takes place in. While the gameplay offered a few new tidbits, such as being able to order companions into position, Ubisoft confirmed full story co-op throughout the game, a welcome addition and one long overdue. With a setting that has the the potential to be a meaningful thematic journey, and the already solid Far Cry fundamentals under it, Far Cry 5 is shaping up to be another great entry into the series. We’ll be heading down to Hope County, Montana on February 27th, 2018.

We had Just Dance and Steep news as well, but all of the big announcements above were eclipsed by a single trailer at the end of the show for the long awaited sequel to Beyond Good and Evil. After the cinematic trailer, showing a very different tone to the classic game, a teary Michel Ancel took the stage to a round of applause, thanking everyone for their patience.

It gave a bit of heart to a solid conference from Ubisoft, which was probably the best of the publisher conferences and a great demonstration of Ubi’s move into new IPs.