Over the space of this year and the last, gaming has taken quite the zany trip to bizarro land. We’re still not out of the woods regarding COVID-induced delays, units of next gen consoles are currently outselling the games available on said platforms and to garnish, remasters of games thought to never see the light of day again are slated for release. Among them is a reworking of Square Enix’s cult classic from 2010: NieR Replicant ver.1.22474487139.

While the decision to re-release the original game makes logical sense due to NieR Automata‘s overwhelming critical and financial success, NieR Replicant and NieR Gestalt were admittedly completely different beasts to its sequel and were panned by almost every major gaming publication upon release. In the interest of time I’ll forego a complete tangent here (because quite frankly, I could talk about this game all day), but it is quite clear that NieR Replicant ver.1.22474487139 seeks to address a lot of issues the original game suffered from and in turn, bring it further in line with the production values and pedigree associated with NieR Automata. 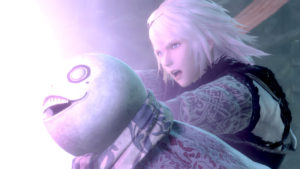 Without revealing too much of the lore, NieR Replicant ver.1.22474487139 throws you into the perspective of a teenage boy taking care of his plague ridden sister set some 1400 years into the future. This motivation sets the stage to explore lands far and wide, meeting people of different cultures and fighting enemies both monster and machine to find a cure. While not a unique premise, it is brimming with soul and an earnestness that’s worth overlooking the game’s sore spots; particularly the avenues of gameplay and pacing.

Luckily I was able to put a preview build through its paces, trying out a varied amount of closed combat focused dungeons as well as the more open-ended plain areas. One immediate tell is that the overall performance exceeds that of the original title. The game never misses a frame in or out of combat and manages everything well even in the larger environments. Texturing and character modelling look to have been touched up in these areas and so far look quite good on any resolution no matter how large or small. I won’t shy from the notion that there are a select few character remodels I’m not quite sold on but for a better idea of what I mean, stay tuned to our YouTube channel for our pending NieR Replicant ver.1.22474487139 review, scheduled later this April. 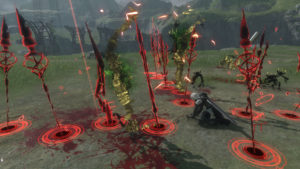 For the aforementioned sore spots, the original game’s release was not only chastised for its wavering performance, but for its loose yet demanding combat and pacing issues. A lot of the game’s original concepts remain like action RPG progression and using a sentient book known as Grimoire Weiss to conjure powerful magic based attacks. NieR Replicant ver.1.22474487139 tightens all aspects of combat up reminiscent to the way NieR: Automata feels. Dodging, air combos and incorporating magic attacks mid-weapon combo are just many of the options that players can explore and eventually master as enemies organically grow smarter and stronger later in the game. The amendments extend all the way down to the movement feeling more grounded and appropriately scaled compared to the original title, where the running and dodging animations of the protagonist didn’t particularly match his pace or the distance covered. All in all, both standard and boss fight sections felt great to play and the tweaks here are arguably the best on offer so far.

If you’re diving in for the the first time and feel overwhelmed by swarming enemies and the free flowing approach to combat, NieR Replicant ver.1.22474487139 sports a neat Auto-Battle option where you can tweak modifiers that can help you get as much of an advantage in combat as possible. Certain options can be turned on and off independently so if you want the game to automatically apply recovery items when you get hit while you’re busy exploring the nuances of combat or magic, the game gives you the right amount of agency to do that. Or if you know you’re a big boy and think auto-combat is for BABIES you can turn the whole HUD off and let the game one hit kill you because you decided to pick a fight with an enemy 10 levels higher than you. Choose to do whatever, I’m not your dad. 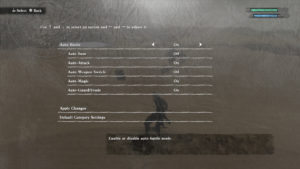 Aside from the combat, pacing remained one of the other issues that irked some players the first time around. NieR is infamous for its wavering tone and sense of urgency, particularly for a tale about a brother sacrificing life and limb for his sick sister. At times, the game can exhaust the most patient of players by cramming menial yet mandatory fetch quests in between major story progression. During our time with the preview build, the narrative beats seem faithful right down to the original cutscene animations and dialogue despite being re-recorded by the original game’s cast. This is both a comforting and concerning implication as certain spots within the original NieR can and will test how much silliness you can stomach in a single game for a good narrative payoff.  The existence of this remake presents a good opportunity to tighten up a few of the loose sections but after playing the preview, there wasn’t enough evidence to suggest any major changes to the ebb and flow of the game. On the flip side, most of Yoko Taro’s hallmarks are here like Weapon Stories, many cute and/or depressing letters from NPCs, WILD BOAR DRIFTING and much more.

While I can’t go into full detail at this point in time, NieR Replicant ver.1.22474487139 is looking very solid from what has been played so far. There are still some facets of the game I’m quite keen to get stuck into but thankfully, most of the pain points of the original release such as technical problems have been tweaked well enough to meet the emotional and narrative highs that the rest of the game provides in spades. Only time will tell if this trend continues to the full game so as mentioned earlier, keep glued to our YouTube channel for our full verdict later next month!

Code for this preview of NieR Replicant ver.1.22474487139 was provided by Bandai Namco Entertainment, and authored by Matt Batten. Please do not follow him at @KartPC.