Rediscovering The Game Boy With The Analogue Pocket

Rediscovering The Game Boy With The Analogue Pocket

There’s never been a better time to be playing games, especially if you’re wanting to get into retro gaming, thanks to some fantastic new devices bringing out the best in older software. It’s a thought that’s been on my mind lately thanks to finally acquiring an Analogue Pocket, the latest retro gaming device by boutique manufacturer Analogue, and the first device of theirs I’ve been truly interested in.

While Analogue have made it possible to side load every Game Boy ROM to have on the go at all times, I’m finding a lot of joy in playing just one cartridge at a time, slowly making my way through a game. To go with this, I recently picked up a copy of Wario Land 2, a game I’ve dabbled with plenty of times over the years, yet never finished. This particular run though? It might be the one to actually get me to the end credits.

That last point is especially important. I’m no stranger to emulation, owning plenty of means over the years to play this on the go. I’ve even bought and modded a Game Boy Advance for the sole reason of wanting to get more into the Game Boy library. There shouldn’t be any real difference playing Wario Land 2 on my PC via emulation, or via the existing FPGA implementation on the MiSTer, or even running on that Game Boy Advance. However, it’s playing the game on the Analogue Pocket that’s wanting to see me finally get through this game.

There’s a few reasons I think this is the case. For starters, the games look fantastic on its screen. Game Boy & Game Boy Colour games fill out really nicely, something that I can’t quite get on that modded Game Boy Advance. It’s also nice to have an FPGA device in a good, portable form factor, something that you can’t quite get with the MiSTer yet. Having Analogue’s great FPGA implementation of gaming devices on the go is also incredibly welcomed.

Coupling this is very easy access to save states. Normally you really wouldn’t need save states to get through Wario Land 2, thanks to the game being relatively straightforward. It does make the bonus games much easier though, since they’re all RNG dependant, meaning you can save a state right before you need to make a guess. If you’ve ever wanted to see the true ending of the game, something you can only see by clearing all the bonus games, Analogue can make it very easy for you.

With just a simple button combo I can save a state anywhere. It’s not a revolutionary feature, but the implementation is simple and elegant. What isn’t as simple or elegant is trying to load a state, a process that requires a few button presses and going through a couple of menus. It’s a minor annoyance, but an annoyance nonetheless.

That speaks to a lot of the Analogue Pocket right now: it’s a device that’s still very much a work in progress, at least on the software side. With the Pocket, Analogue launched Analogue OS, an operating system above and beyond anything they’ve done prior. While most of the things you’ll need to play your games (filters, custom settings) are already present, their new OS promises things like tracking how long you’ve been playing specific games, a library of data from all the games you’ve played and even playlists. 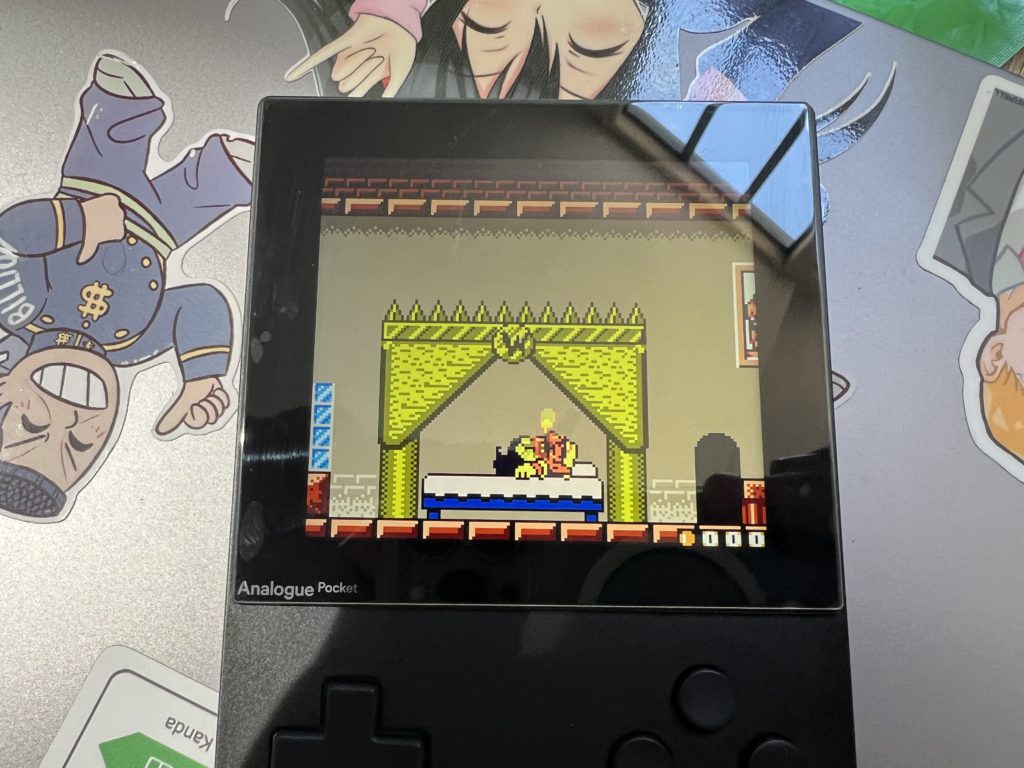 The problem is most of it isn’t ready, with features trickling out across various beta firmwares released throughout 2022. As I’m writing this, a new beta firmware was just released that added in the library feature. Wisely, there’s been more focus on their openFPGA platform, and that has flourished with a healthy cottage industry of cores for you to use. If you’ve wanted to truly compare the GBA and SNES versions of Yoshi’s Island or the Donkey Kong Country games, especially on the go, the Analogue Pocket is a hell of a way to actually do it.

Then there’s the whole ordeal of actually getting one. While you can pay for a unit right now, it’s an expensive ordeal, though it’s nothing compared to the real cost: time. There’s little to virtually no guarantee you’ll actually get it any time soon, with the most likely delivery date being before the end of the year. While it’s definitely enough time to begin amassing a collection of cartridges to play on this device, it’s by far the one thing that I fear might be a turn off for potential buyers.

To give you an idea of how time consuming this process has been, I ordered one on December 15, 2021. I received a tracking number on December 15, 2022, within a few hours of it being exactly one year since making the purchase. You almost have to go into the purchase knowing you won’t be seeing this for a while, or getting much in the way from Analogue as far as communication goes. If you can accept that, as insane as it all sounds, then the wait will be worth it.

That all said, the Analogue Pocket is a great device if you’re serious about wanting to play Game Boy games in the best possible way. There’s certainly cheaper and more readily available ways to do this, but I don’t think there are as many that feel as nice as this does. It’s gotten me to seriously look into grabbing carts of games that I love dearly, so if anything else, it’s a success there. Hopefully by the time the next set of units ships out by the end of the year, it’ll feel like a more complete device, but if you’re serious and willing to take the punt now, know that your patience will be rewarded.

When he’s not restarting yet another classic game, you can find Jamie over on what’s left of Twitter at @jamiemgalea