The 2018 reboot of God of War was a game nobody was expecting to be as good as it ended up being. It took a franchise that had been languishing and reinvented it in some incredibly drastic ways. It’s no wonder why people responded so positively to it, hell, we even named it our Game of the Year for 2018. To say that its sequel, God of War Ragnarok has some hefty expectations going into it would be underselling it. Does the weight of those expectations weigh down the game, or does it rise above those to crown another Game of the Year contender?

God of War Ragnarok begins several years after the events of the last game. With the death of the god Baldur, the Nine Realms have been plunged into Fimbulwinter, the great winter that acts as a prelude to the end of the world. Kratos and his son Atreus have been training for the inevitable conflict at the end of Fimbulwinter, fearing the day that Atreus’s vision of Thor arriving on their door step will arrive. When that day does arrive, events are put in motion for both Kratos and Atreus to go off on a quest to put an end to Ragnarok.

As far as generally playing the game goes, Ragnarok will feel immediately familiar if you’ve played the 2018 God of War reboot. If you were expecting another wild shift like the 2018 reboot, this isn’t that game. Ragnarok feels safer, not choosing to innovate further, but instead refining what was already a solid experience.

You’ll still be running around the realms fighting enemies, solving environmental puzzles, climbing specifically marked walls, finding loot to improve your stats and unlocking skills from one of several skill tress. If any of that put you off the last game, then it won’t change your opinion here.

This is especially the case here, as Ragnarok is a much bigger experience than the original game. Where the first game had a relatively small cast, there’s now a much larger cast of characters to meet and interact with. Where the first game had lots of forests and caves, there are more realms with a greater variety of colour palettes and environments. There are also more boss fights against a much larger variety of foes, which is such a welcomed change from the last game.

Everything feels bigger and more expansive, befitting the epic nature of what you’re going through. It never feels too overwhelming, if anything having more God of War can feel like a blessing at the best of times. If it means there’s more avenues for Mimir, your talking head on a belt, to tell you even more stories of Norse mythology while exploring the world, I’m all for it. 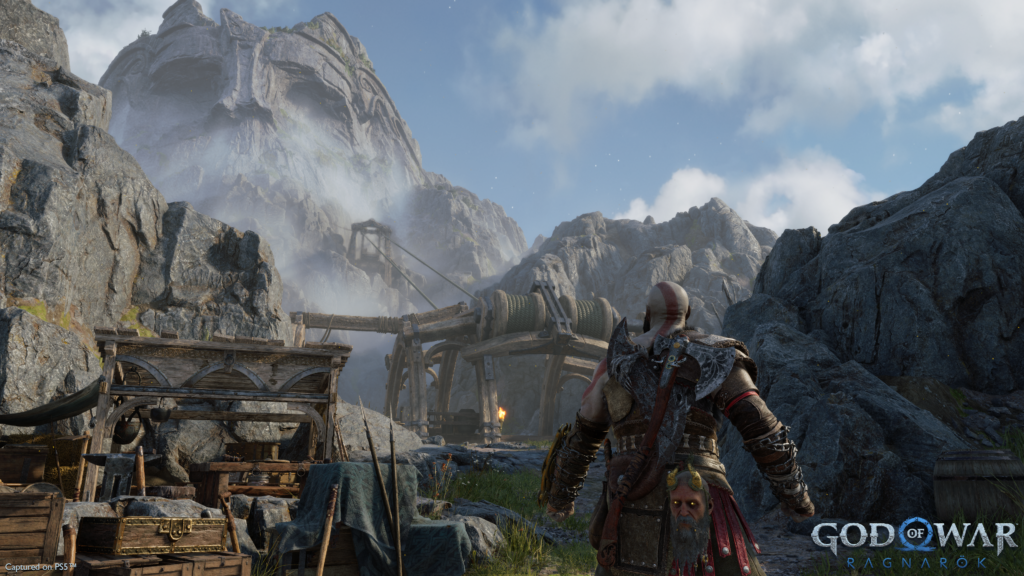 It also gives you a further expansion of the relationship between Kratos and Atreus, which is just as compelling as it was in the 2018 game. Without getting into specifics, big chunks of Ragnarok’s story is dedicated to the two dealing with the ramifications surrounding Atreus from the last game’s conclusion, and it’s riveting to experience.

Any time the two are bantering or just trying to deal with whatever’s going on remains compelling as we see more of their incredibly complicated relationship. Even if you’re not the biggest fan of actually playing the newer God of War games, it’s worth checking out Ragnarok just to see where their story goes at the very least.

That’s not to say that there aren’t any tweaks or additions though. What’s changed mostly is that the game doesn’t beat around the bush in getting you up to speed with its mechanics. As an example, the Blades of Chaos, a late game weapon from the previous game, becomes a bigger part of the overall game. Not only do you get it much quicker, but it forms a part of Kratos’s ability to move throughout the world. There’s even a handy chest in the central hub if you missed dropped loot throughout your adventures, which is incredibly handy if you’re wanting to upgrade your gear.

The biggest changes to the gameplay have been some welcome improvements to the combat. At its core, it keeps the foundation of the last game, so the general feel is the same. That’s not a bad thing, and there’s still really nothing quite like the feel of the Leviathan Axe. You’ll still need to keep tabs on groups of enemies at a time, so if you weren’t a fan of that, your opinion still won’t be changed.

The biggest shift is that in a lot of cases, there’s a greater emphasis on the environments in which you fight in. Not only are they larger, but there’s more verticality, meaning that enemies like to climb up on trees or attack you from a greater height.

Taking care of this is simple: you can shoot them down from these heights, shoot parts of the environment to stun them or throw objects in the environment to help close the gap. It’s not a massive change, but it helps give the combat a little more depth and get you using your ranged abilities more.

The best thing complementing the game happens a slew of handy game and accessibility options to make the experience a bit more palatable. Not only are there a massive suite of things you can tweak and adjust as per necessary, there’s also a lot of granularity with these options.

My favourite of these is the ability to turn on automatically grabbing items and loot. You can choose to grab everything, but also choose to either just grab loot, or just grab items. These options are incredibly welcome and go a long way in creating the most accessible God of War to date, continuing Playstation’s trend of best in class accessibility features. 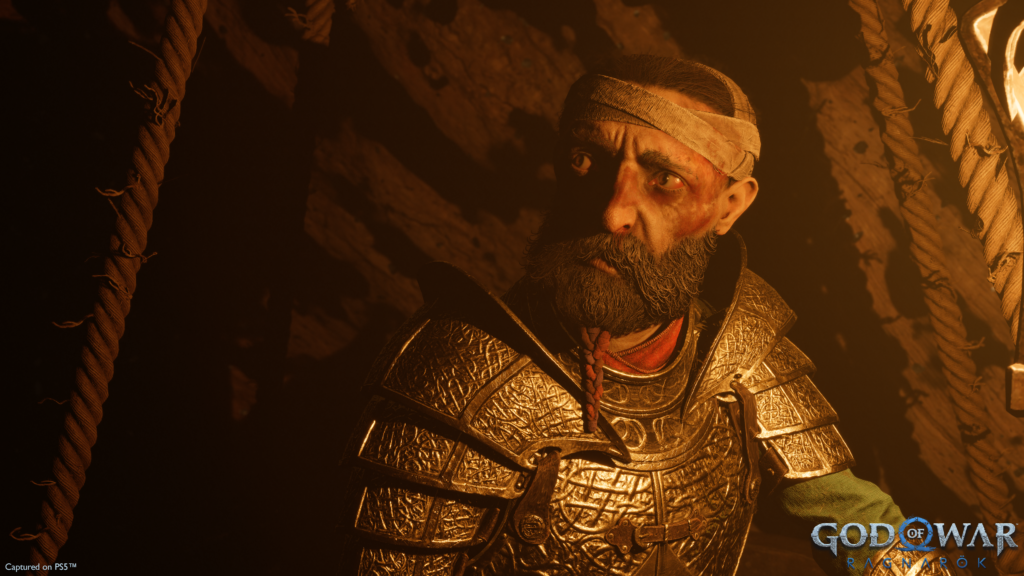 Probably the aspect that’s going to be the most controversial to some is that even though God of War Ragnarok was initially announced as a PS5 game, there’s also a PS4 version that some may perceive has held the newer generation version of the game back. Even with the faster storage and bigger memory, you’re still going to see a lot of characters squeezing through tight gaps or holding up heavy objects lifting their path.

It can feel a bit weird seeing this on the PS5 version, but it doesn’t detract from the overall experience. The higher frame rates and resolutions that the PS5 offers more than make up for any shortcomings, and is by far the best way to play the game if you’re able to play it that way. And at the very least, it’s a small cutscene that allows you to take a micro break from the action, which isn’t the worst!

Regardless of what version you’re playing, it’s yet another example of the amazing technical prowess of Sony Santa Monica and Playstation Studios as a whole. Much like its predecessor, Ragnarok still maintains the single take technique throughout the whole game, and it’s still as striking and as memorable as it was prior.

There’s some new tricks the game pulls off with the single take technique that are among some of the most astonishing I’ve seen in a game all year. And as you’d expect from a major first party title, it looks immaculate, and coupled with a good soundtrack and excellent voice work.

That said, what’s more of a concerning issue is the game’s pacing. While it is certainly much bigger and more expansive than the last game, Ragnarok has an awful problem of wanting to stretch out a scenario just a bit longer than it really warrants.

This isn’t referring to optional sidequests or things to do off the critical path, but if you’re trying to advance the story. More often than not when you’d think you’re done with a chapter and you’re about to move on, the chapter you’re on will throw just a few more things that you need to do. This happened repeatedly during my time with the game and as compelling as it is overall, it does drag the experience down just a tad.

At the end of it all, God of War Ragnarok is one of those games where if you have a Playstation, you absolutely should check it out. It may feel a bit too similar to the last game and does tend to drag at times, but it’s incredibly well made, and a great refinement on what made that reboot work. The characters and narrative still work, and the combat is solid as ever. There’s a lot more I could say, but some of the best moments of the game are worth seeing for yourself.

I don’t think it’ll be my Game of the Year, but there’s no denying that the four year wait has been worth it. If you’re after one last big game before 2022 is done, God of War Ragnarok is definitely worth it.

God of War Ragnarok was reviewed on a Playstation 5 using review code provided by the publisher.