Bandai Namco’s Tales series occupies an interesting space in the RPG canon. For over 25 years, it’s been thrilling audiences with exciting combat, memorable characters and distinct, anime inspired high fantasy. Tales of Arise, the latest game in the series since 2016’s Tales of Berseria, is the first entry in the series to have a simultaneous worldwide release, and if this is the game Namco wishes to declare as the first global Tales game, it’s a hell of a statement.

Let’s get the obvious out of the way: Tales’ brand of RPG channels a heavy anime vibe, and Arise won’t change your mind if that’s a turn off to you. We’re talking art style, aesthetic, even down to characters constantly shouting out their attack names. Tales could be described as something of an acquired taste, yet it has plenty on offer if you’re willing to give it a go. 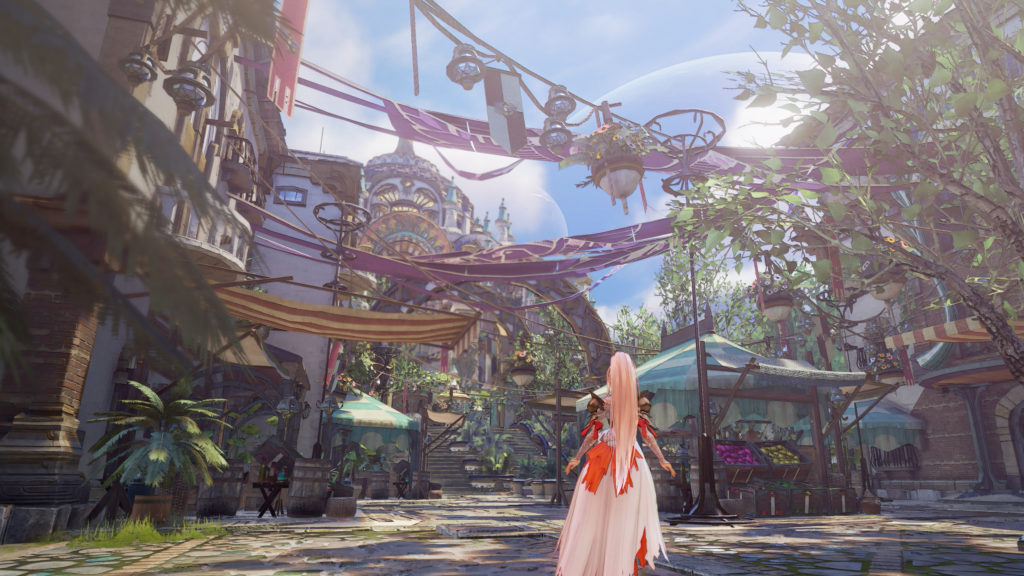 Tales of Arise tells the story of two planets: the technologically advanced Rena and the energy rich Dahna. Over 300 years ago, the Renans invaded Dahna and enslaved its population, and over the centuries divided the land into five territories and pillaged its resources. By chance, Alphen, a Dahnen slave, and Shionne, a Renan outcast, meet up with not just each other but also a resistance group, setting the stage for our heroes to liberate their planet and to find out more about themselves.

For a Tales game, which typically avoid exploring darker themes, it tackles some heavy concepts and presents some interesting, if underdeveloped, ideas. The story is decent enough, but it plays home to one of the more captivating worlds in the series. The different territories provide wildly different visuals and vibes, and the sci-fi elements that the Renans possess, working within the Tales high fantasy aesthetic, is quite striking and refreshing for the series.

It also helps that the characters you interact with are compelling, particularly the dynamic between its two leads, Alphen and Shionne. While the game makes it perfectly clear that the two are meant to co-exist, it’s the bickering and banter between the two which makes them stand out as they combat centuries of hierarchy in order to change the world, and seeing them grow and get along over the course of the game works out better than I’d expect out of the series.

Furthering this are the revamped series of Skits, the primary way Tales games have their characters discussing the events of the story. Where Skits in prior games saw 2D portraits represent the characters, the presentation this time around is almost comic like, as it uses motion comic-esque movement with the full character models, with the movement presented in panels for each moment.

It does lose a little something over the gorgeous 2D art that Namco used prior, as everything that uses the motion comic style tends to do, but it still fundamentally works to give the party time to shine and help bring some welcomed levity to the story. It’s one of the many ways the way the game presents itself has changed thanks to the focus on newer hardware. 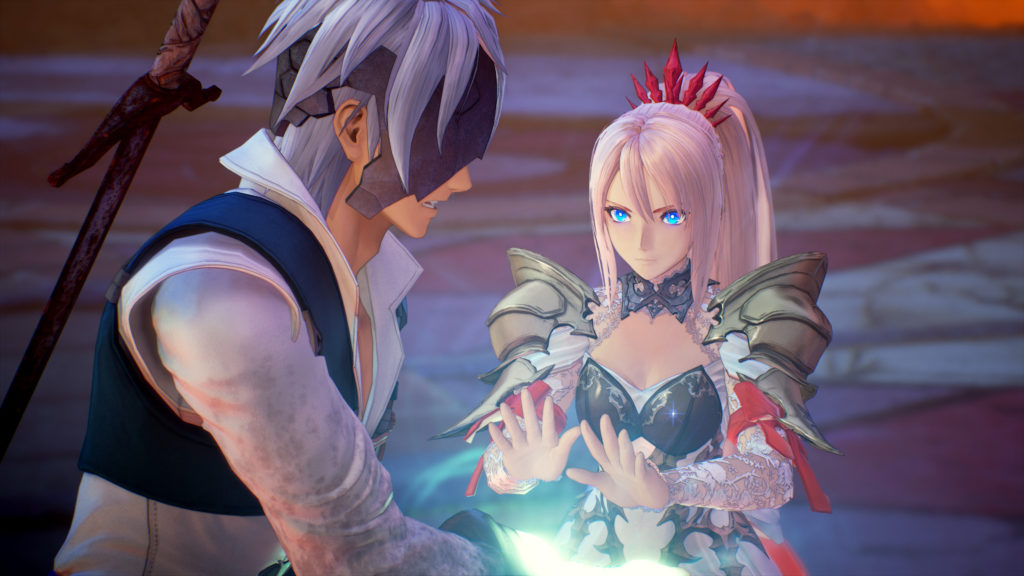 Tales of Arise is the first game in the series to run on Unreal Engine 4, and with that, it feels like there’s been a major increase in production values overall. Compared to prior games in the series, cutscenes feature actual setpieces and even major boss fights have a more cinematic element to them. It’s the first time Tales has felt like a true RPG contemporary in years, and it’s an exciting change.

Arise also happens to be the first entry in the series to appear on the Playstation 5 and Xbox Series consoles, but if you don’t have access to them, there’s little to worry about. On the PS5 at least, while the game is optimised for the console it doesn’t take advantage of any of the notable controller or console features. Load times are tolerable, but don’t expect any neat SSD tricks or anything to make loading any better. Arise ships with a performance/resolution preference option, and the game still looks fantastic on either setting and is playable enough even on the higher resolution setting.

Regardless of where you’re playing it, the game just feels snappy in general. In lieu of the series’ elaborate victory celebrations, victory quotes are now played as you get back into the overworld. Moving around the world feels seamless. If you’ve got junk to sell, vendors will immediately ask you if you want to sell your junk before moving onto the rest of your items. It feels fantastic.

It’s something that continues the series tendency of being user friendly, thanks to some nice quality of life features. One new feature in particular is worth highlighting: You can tag any skill for any character to alert you once you’ve obtained enough currency to unlock the tagged skill. It’s incredibly useful, and something that should be more widely implemented in other games.

Sadly, this would’ve been a useful feature when it came to upgrading weapons. Unlike the vast majority of RPGs, you can’t just pay currency to obtain a new weapon, you also need to contribute crafting materials to go with it. From a story perspective it makes sense, but in actuality proves more frustrating, since it ends up leading to more grinding and taking you away from the story. 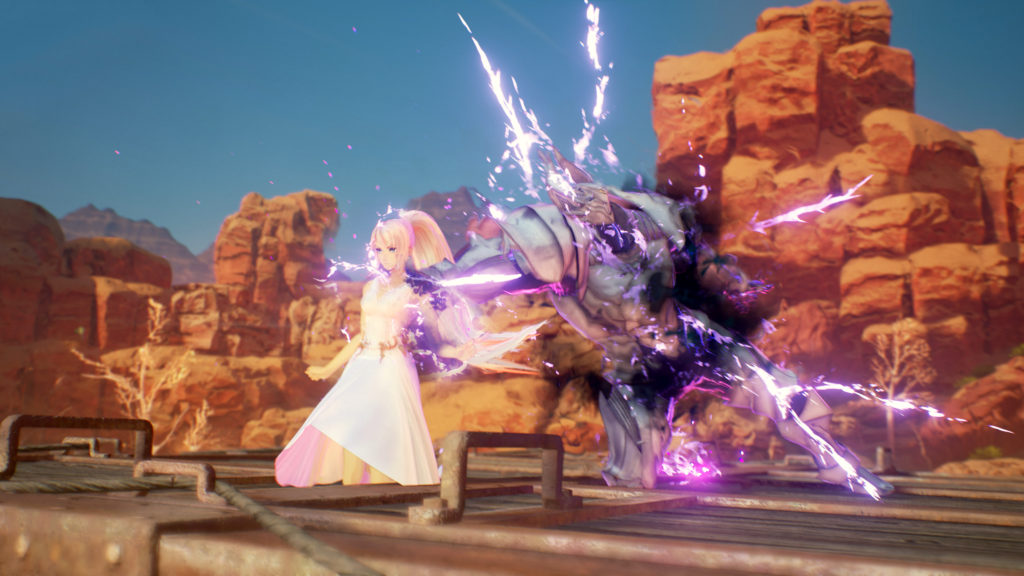 Fortunately, getting into battles is fun in Tales, thanks to its excellent combat system. Arise is no exception, with some major improvements. If you’re unfamiliar with the series, Tales combat is real time where you directly control characters, with fights feeling more like arena brawls, but not as tight as something like an encounter in a Platinum game. Arise still keeps this feeling, but the additions made here make battles satisfying to play out.

For starters, there’s now a bigger emphasis on mobility. Aerial combat is now a viable part of fighting, and a critical part of maintaining combos. Dodging, something that was a focus in older entries, is back and improved with perfect dodge and counterattack mechanics.

By far the biggest improvement over prior entries is that Arise does a great job in making each character feel unique, with your party members each having a specific “perk” to help define how they fight. For example, Alphen can hold down some of his moves to trigger more powerful follow up attacks at the cost of some of his HP. Shionne fights entirely ranged, and has special ammo with different effects that you can cycle through.

It works wonders in allowing players to find what kind of game style works for them. Given that you can freely change who you’re playing as at any time, there’s good reason to experiment and find out who or what works for you. It’s not a requirement to do so, and you can get by letting the AI do their thing and just focus on controlling the one character, but if you want to get the most out of combat, switching characters helps. 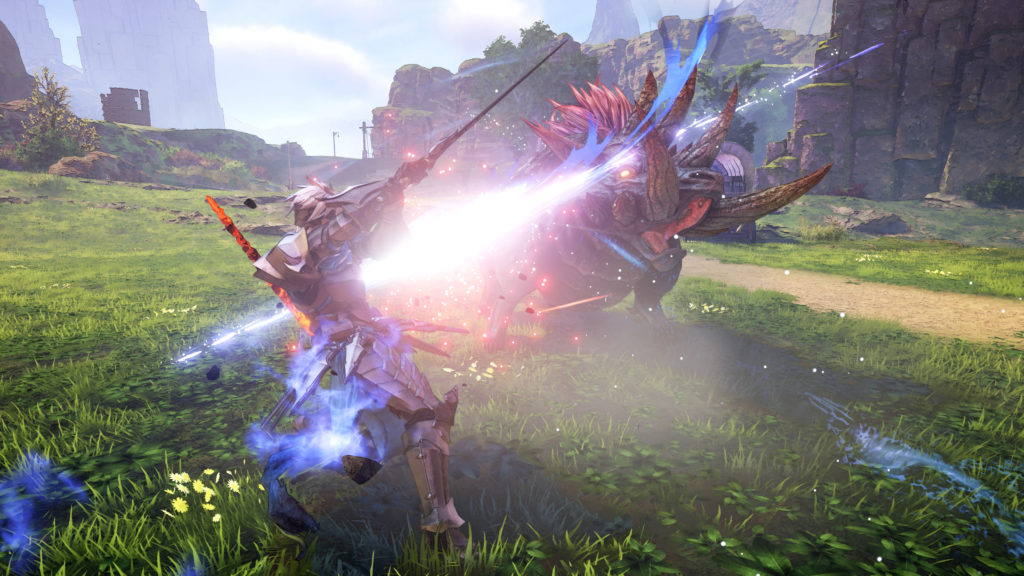 All of these systems coalesce to give players incentive to find a good combo to min/max damage output while also being efficient with your current abilities. This also leads into the final new system, the Strike system, where you can instantly kill an enemy by filling up a gauge without dropping a combo. It’s a great reward for knowing what you can do with your characters at any given moment.

The systems push you to try to figure out what are the most optimal combos you can do, and you are rewarded with some incredible results for your trouble. With lots of abilities to unlock, it makes combat feel incredibly satisfying and rarely repetitive, and gives you plenty of options and means of customising your characters to play how you want.

For the first global Tales game, Arise pushes the series forward in some crucial directions, yet distinctly retains much of its identity and core tenets. It features the best iteration of the combat system to date, likeable enough characters and a story that makes them work, and some nice features that need to be a bigger deal in other games. If Tales’ brand of RPG isn’t a turn off to you, or you’re looking to get into the series, you’ll be rewarded with one of the stronger entries in the series, and an experience unlike any other this year.