F1 2021 finds itself at a major juncture. It comes out the year before a major overhaul to the Formula One technical regulations, it’s the last game to be developed under an independent Codemasters (with the developer being acquired by EA in early 2021), and it’s likely that this is the last F1 title to be primarily developed for the PlayStation 4 and Xbox One. I’m glad to report that this game ends the current era on a high note.

Like last year’s game, F1 2021 presents a season unaffected by Covid. The default season still features races in Australia, Canada and Japan, despite them being cancelled in the real world. One of the replacement tracks, Portimao, has been added as a free content update, and Imola and Saudi Arabia will also be added for all players in the future (just don’t expect any good racing in Saudi Arabia and it’s narrow, narrow track).

Otherwise, the improvements to the underlying game since last year are mostly marginal but consequential. The physics and handling continue to be improved; I noticed more acutely the lack of grip from my increasingly used tyres and the dirty air being blasted by the cars ahead. Additionally, the AI is more aggressive in defending their positions compared to last year; though like previous years you have full control over AI difficulty, albeit in an opaque 0-100 sliding scale. 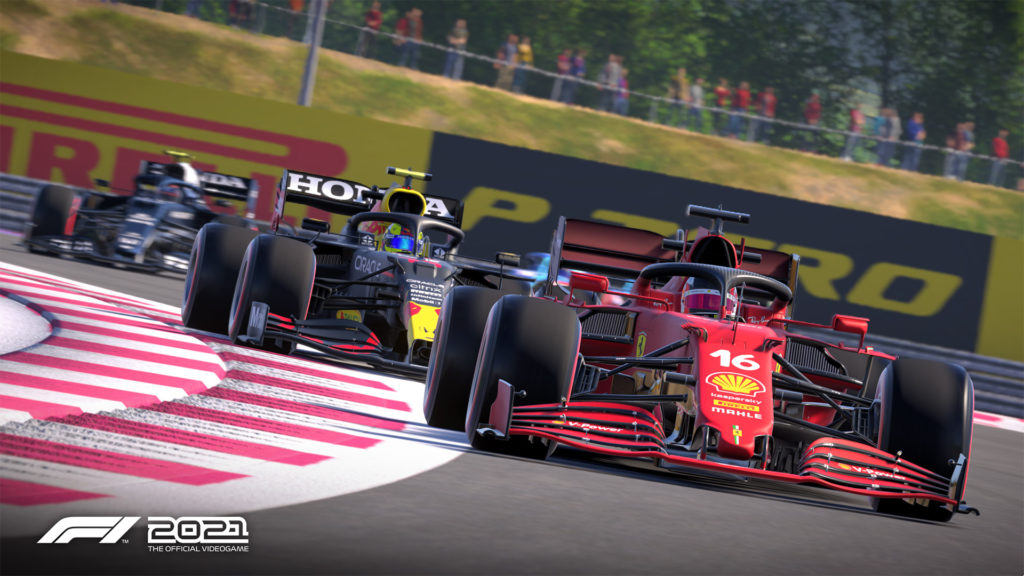 The marquee addition to F1 2021 is ‘Braking Point’, a single player narrative that puts you in the seat of rookie driver Aiden Jackson as he joins an F1 team alongside veteran teammate Caper Akkerman. The on-track action is split between specific objectives (overtake your teammate before a certain lap, make it into the top 10 after an unscheduled pit stop) and abbreviated lights-to-flag races. The variety in these scenarios helps the pacing of the campaign.

The off-track drama is delivered through well-produced pre-rendered cutscenes. If you’ve ever even glanced at a sports drama, then you’ll know exactly where Braking Point’s story goes: Rivalry between the rookie and veteran teammate, paddock gossip not too far removed from a high-school hallway — it’s all there, neatly lined up like a starting grid.

The story is carried by its side characters: Casper Akkerman is a well-rounded and sympathetic figure, whilst your rival Devon Butler is delightfully smarmy and is arguably one of the better antagonists in recent gaming. Unfortunately, the main character has absolutely no charisma — even his name Aiden Jackson blends into the white background of your browser — and you have no reason to wish for his success.

The biggest issue with Braking Point, however, is that it has to compete with the amplified drama provided by Netflix’s Drive to Survive series. Even worse, it exists in a world where the actual 2021 F1 World Championship is proving to be the closest and most dramatic season in recent years. Compared with these, Braking Point simply can’t compete. 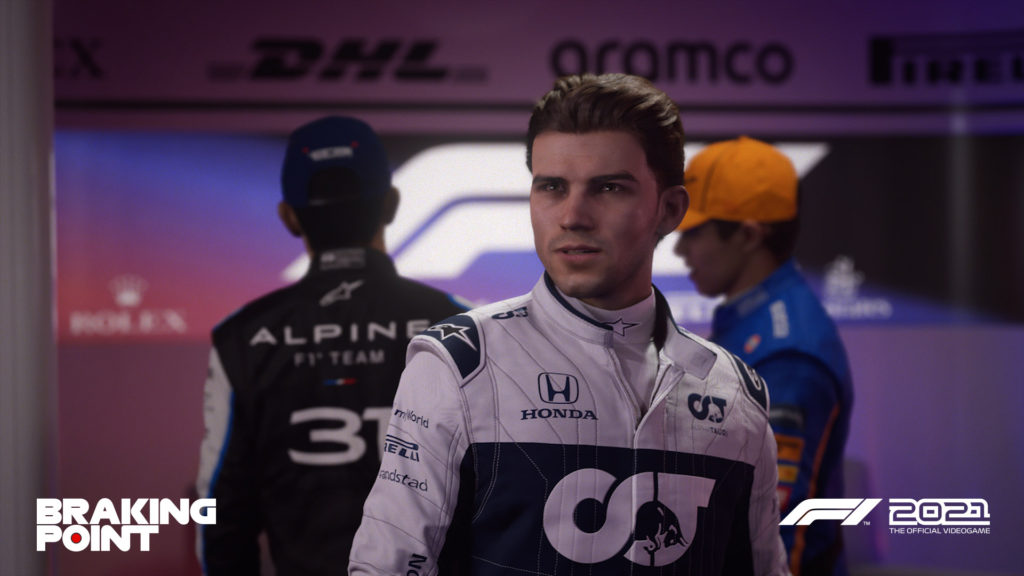 If you just want to race a season of F1, last year’s My Team mode returns mostly unchanged. You can still create your own team and join the paddock as the 11th team, improving your car and your facility along the way to eventually compete for the podium positions. The RPG-esque progression still draws you along, and the act of naming your team and designing your livery still makes the stakes of each race just that bit higher.

The biggest improvement lies in the process of earning R&D points, which has been significantly streamlined. You can still run through each of the practice session manually to earn optimal R&D, but now you can run Quick Practice sessions where you select a programme to run and manage the probability of success. Although you’re ultimately earning fewer R&D points this way, it greatly cuts down the monotony of practice, especially over multiple seasons.

Besides this, the quirks and peccadilloes from last year remain. Your in-game rivals continue to be detached from reality (for one, Haas isn’t completely scraping the bottom of the standings); although there are updates purporting to fix this, they never cascaded into my save file. I also found myself deferring more and more to the auto-suggested R&D improvements, even if they weren’t the best for my car’s deficiencies. 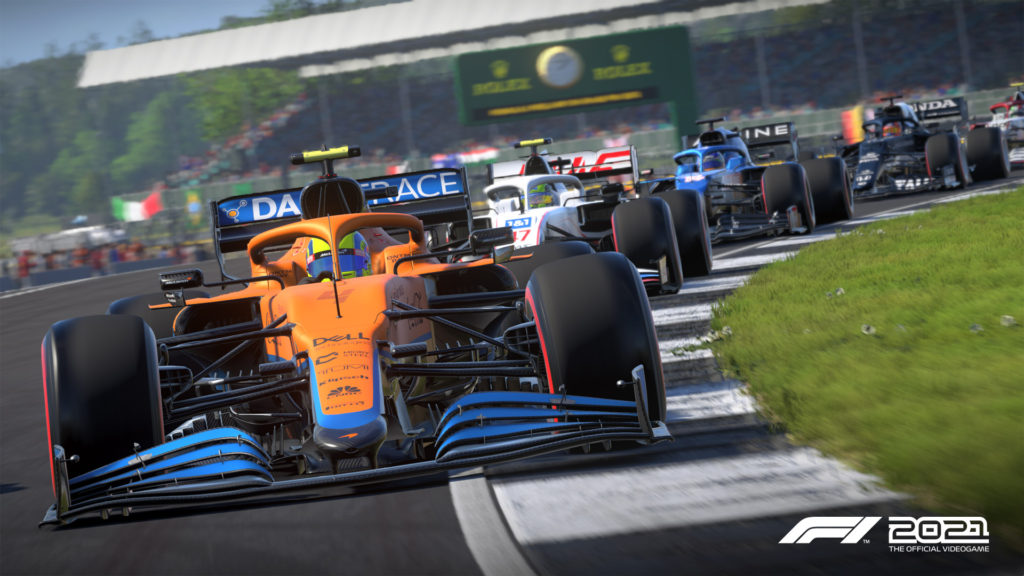 F1 2021’s graphics are more of an iteration than an overhaul, to the point where the ‘non-RT recommended’ hardware requirements on the PC version are identical between last year’s game and this year’s. This is especially apparent in the human models and animation, which continue the F1 series’ tradition of hitting the apex of the Uncanny Valley.

Having said that, F1 2021 marks the series’ debut on the PlayStation 5 and the Xbox Series X, and with this comes 4K 60 frames per second performance (or 1440p at 120fps if you have a compatible display) and ray tracing. Performance on the PlayStation 5 was silky smooth during races, although the same can’t be said of replays and in-engine cutscenes which are much choppier.

The biggest new-generation improvement to the F1 experience comes from, of all places, the DualSense controller and its adaptive triggers. You can feel when the brakes are locking up under you, when you’re just about to slide out from a corner. It seems like a small thing, but it changes how you approach and exit corners; coming from the Xbox One controller, I found myself driving more aggressively knowing exactly where my grip was. 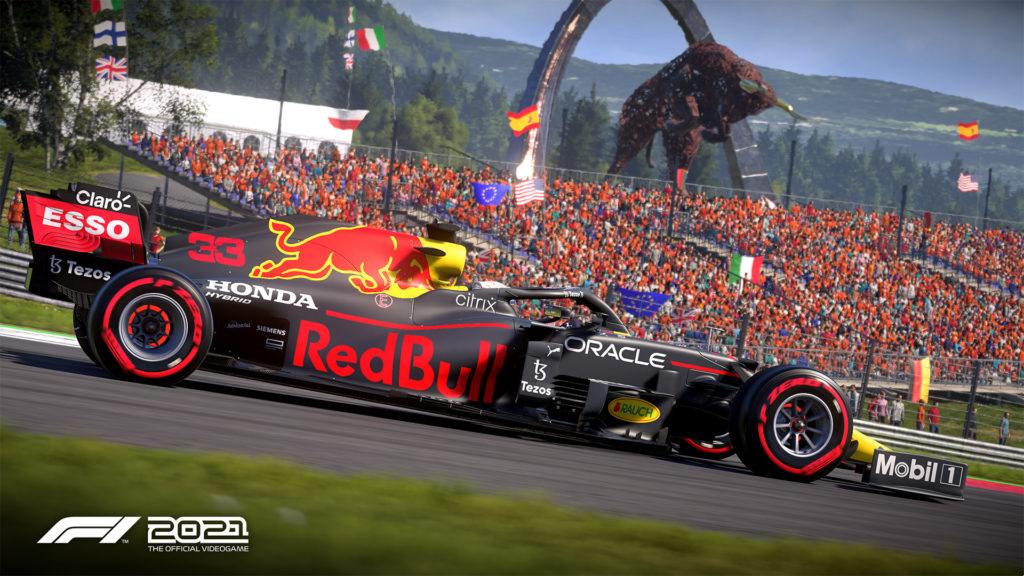 F1 2021 is almost a swan song for the franchise before the inevitable upheaval presented by new F1 regulations and a new publisher in EA. The continual improvements to the physics engine and broader experience make the racing feel better than ever. Braking Point provides an enjoyable-if-light sports drama, even if the beats are as predictable as a race in Monaco. And with the free track updates, this is the most fully-featured F1 game to date. I’m not sure what F1 2022 will bring, but it will have to work hard to beat the standard set by F1 2021.